This blog is published chronologically. Go straight to the most recent post.

1. Board Trip; Not Bored Trip

B4 serves on a Board of Directors that has decided, for the first time, to hold its quarterly meeting outside the U.S. They have chosen a market where their satellite European headquarters is located: Lausanne, Switzerland. The timing could not have been more interesting: we are moving in three weeks and we are attempting to seal the deal on the impending sale of real estate we own. Not stressful, not stressful, not stressful; that is our mantra. I decided that I would not blog on this trip but was overruled by B4's friends who kept complaining to her that our entries were not coming through. So, these first few entries are written ex post facto.

We fly from Kansas City to Chicago O'Hare.

At O'Hare, we wait a bit, and then climb aboard a British Airways 747 and settle into a pair of rear-facing seats for an overnight flight to London Heathrow. I normally set my watch ahead to "destination time" and sleep on eastbound overnight flights but, for a reason I cannot explain, I decided to enjoy the fancy meal and watch an Academy Award nominated movie I missed at the theatres and had been wanting to see: “Straight Outta Compton.” B4 was occupied with “a few hundred” email replies and, what can I say, we both barely squeezed two hours of fitful sleep out of the eight hour flight.

We land at Heathrow at 7:45am after nearly no sleep and make our way to the BA business class lounge for some coffee and breakfast. On the way, we ran into Vince, an executive at the company, who was making the same journey. After a short under-two-hour layover, we're off on another BA flight—this one only an hour and three-quarters long, to Geneva.

After a quick immigration check to get our passports examined and stamped, Vince, B4 and I are greeted by a driver who shuttles us on the forty minute drive to Lausanne. Along the way, we see many fields of bright yellow flowers which we believe to be rapeseed, the third largest source of vegetable oil in the world (after palm and soybeans).

Problem: we broke our own rule and didn't sleep on the way here.

We check into our hotel, The Palace, which is as its name implies. Built in 1915, it sports five stars even though its elevator doesn't. Lausanne is the capital of the French speaking Swiss canton (state) of Vaud. In the far Western part of Switzerland, Lausanne sits on the northern shore of gigantic Lake Geneva; across the lake to the south is the French town of Évian-les-Bains from where the water comes. Since 1944, the International Olympic Committee makes its home in Lausanne as do 150,000 Swiss citizens. Romans founded the place in the second century.

There is much growing of grapes here for wine making and the white is quite nice. Another claim to fame for Lausanne: it has been called the smallest city in the world to sport an extensive rapid transit system consisting primarily of electric trams similar to the ones just now opening for business in our home city of Kansas City, Missouri. KC’s are prettier.

We are hosted at a welcome cocktail party and dinner where I meet executives, board members and my fellow spouses who I shall heretofore describe as my sister wives. The dinner lasts a good while but B4 and I hang strong going without much sleep now for too many hours. When we finally retire it is for the good deep sleep that often does not come after commencing a journey such as this.

3. Sister Wives and Me 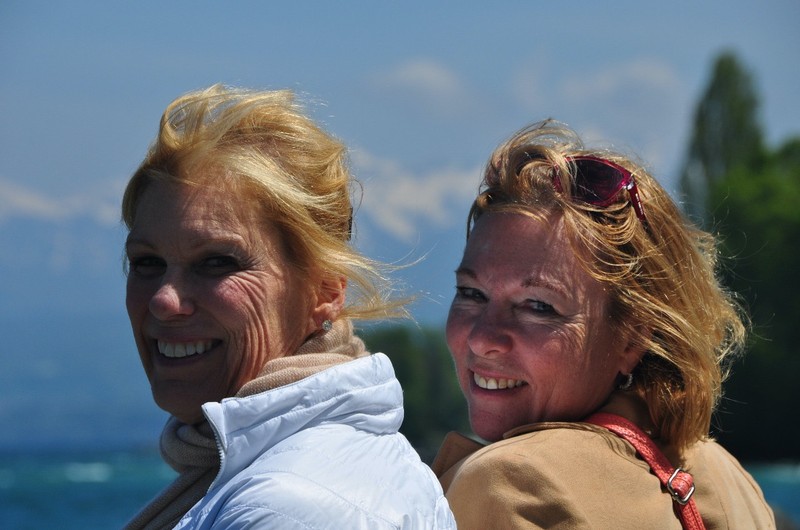 After breakfast in the hotel restaurant—it is still a bit chilly for the outside patio to be open— B4 is off to the local headquarters office for meetings and I walk for an hour before meeting up with sister wives Stephanie and Lynne. We plan to take a train to Nyon, Switzerland, and then a ferry across the lake to Yvoire, France. There is a botanical garden there which has attracted the attention of S&L and I tag along.

The three of us make, by my account at least, a good match. Stephanie occupies the role normally played by me as she determines the route and leads the parade. I love it. We enjoy the day which is punctuated by a wonderful lunch and bottle of wine on the Yvoire waterfront as we await our return voyage to Nyon and then riding of rails back to Lausanne. 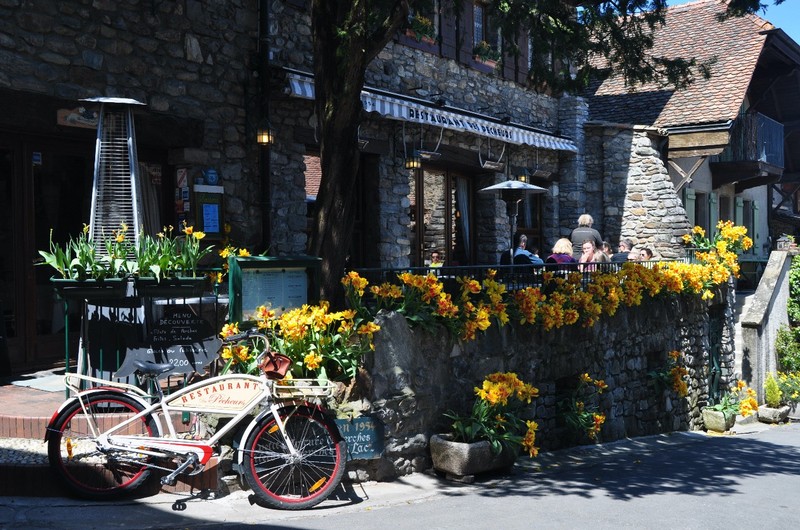 I get a good number of steps in on this day punctuated by one fine vertical climb from the Lausanne train station up the hill to The Palace. I see B4 briefly before her Board dinner; I join my larger group of sister wives for dinner at Tribeca, a ten minute walk from our hotel. Both our dinners end at about the same time and we meet up just in time to fall into bed for another wonderful night of catch-up sleep. 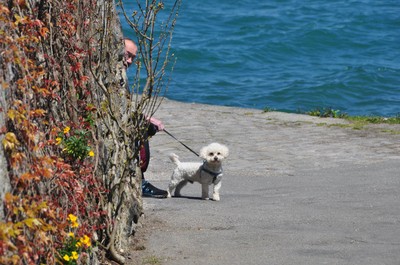 A perfect day for a winery

It is Ascension Day in Switzerland and all the shops are closed. Christians celebrate Ascension Day, also known by some as Holy Thursday, as anniversary of the bodily ascension of Jesus into Heaven. My sister wives are devastated at the lack of available shopping while I could not manage to care less. As they attempt how to spend their time (while their spouses celebrate what will be a day of under-used credit cards) I set off to
achieve 20,000 steps. 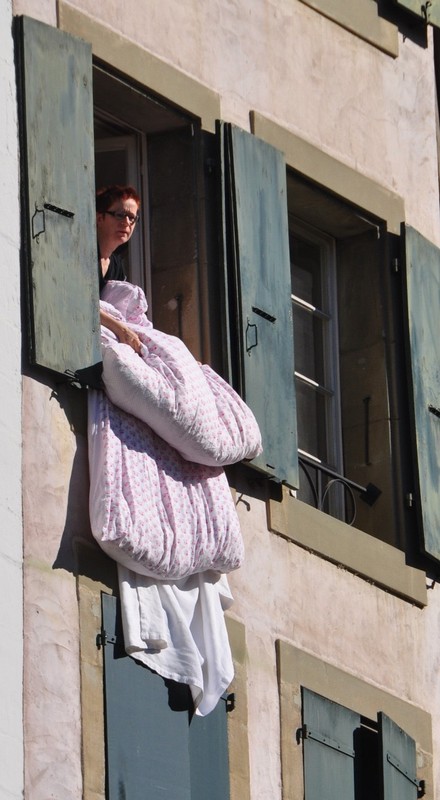 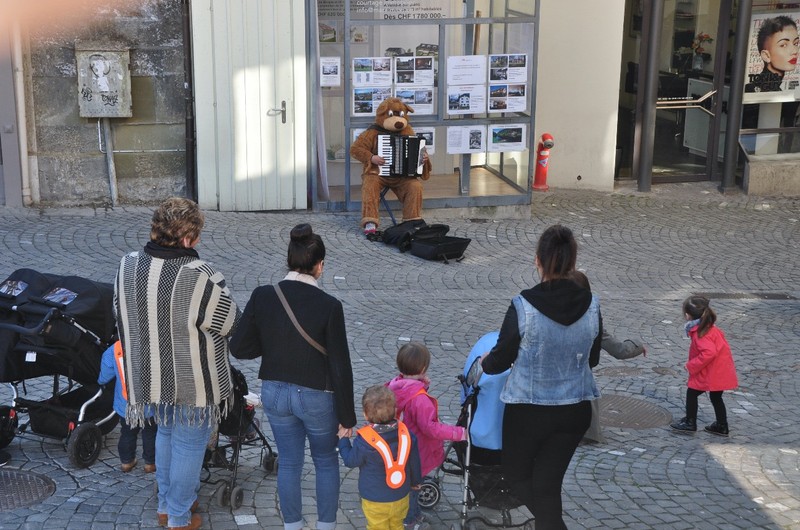 I head down the hill to the shore of Lake Geneva, I follow the twists and turns that rain water makes until I am at the shore line. The path was anything but straight and the streets, given the holiday, are eerily deserted which makes my walk that much easier. Turning left I walk east past the Olympic Museum until my path is blocked by a marina, a distance of four miles or so. Turning around I retrace my steps now watching boats on my left which had an hour before been on my right. The day is sunny and warm and the path, while narrow, is flat. At least, it is flat until I reach my starting point where I turn to head up, up and up back to The Palace.

All of us, wives and board members alike, are to meet at the hotel lobby at four for a coach ride to a local winery. La Baronnie Du Dezaley produces quite nice whites. Were I you, I would pass on the reds. 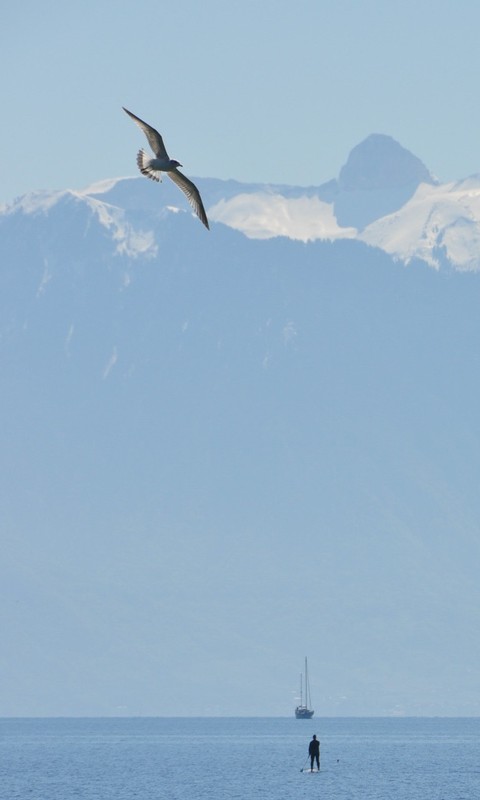 Back to the hotel, we have just a bit of time to freshen up before we are whisked off to Lausanne's other five star hotel, the Hotel Beau-Rivage, which I had passed on this morning’s walk. Here cocktails are had on the lawn where after we retire to the Palace Salon for dinner. Fine conversation ensues as the meetings have ended and we will all make our ways to subsequent destinations in the morning.

Some are heading home, others are river cruising or otherwise touring to take advantage of the fact that the meeting was held here.

A float trip unlike any other

After breakfast, we are whisked back to the Geneva Airport at 9:00 arriving in ample time for our noon departure aboard KLM to Amsterdam. The flight is short—under 90 minutes—and we negotiate the gigantic and opulent Schiphol Airport where one enormous terminal building is home to three separate departure terminals. Since we remain inside the European Union on our move from Switzerland to The Netherlands, we need not show our passports or encounter immigration authorities. It is just like flying from one U.S. destination to another—there is no hassle other than security which is here as it is at home.

Our reason for choosing Amsterdam as our post-meeting destination is to visit the Asscher family—they of Royal Asscher Diamond fame. B4 has become a primary retailer of Royal Asscher's "Asscher Cut" square diamonds in the U.S. and that has resulted in a friendship between the family and B4 and, by extension, me. Lita collects us at Schiphol and delivers us to The Hotel Okura Amsterdam which sits four miles south of the Central Railway Station in a neighborhood not frequented by tourists. Alongside a canal, the setting is more like one would encounter staying at Airbnb instead of a high rise hotel. We are upgraded to a mini-suite—a corner room which sports a bathroom with twin pedestal sinks standing guard in front of floor to ceiling windows. It makes quite an impression. More on that later.

After time to unpack we are back at the lobby and again whisked away by Lita and her fiance to meet her father, Edward and brother Mike and a Japanese businessman who is the CFO of Seiko Holdings—a friend of Edward’s. 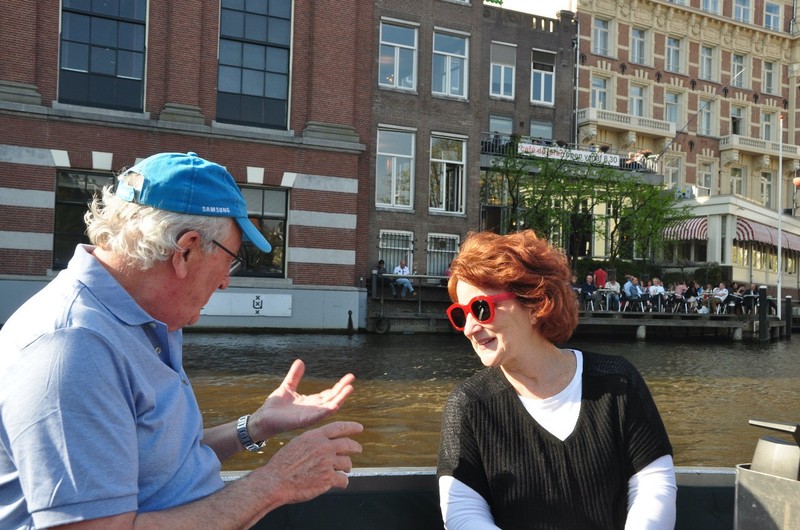 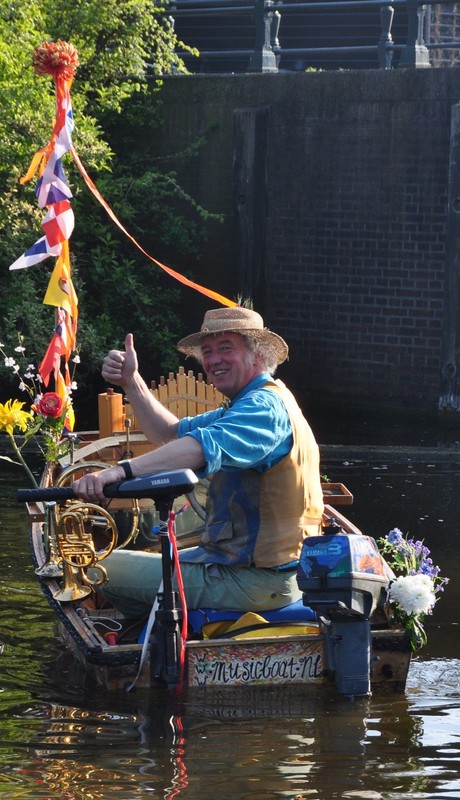 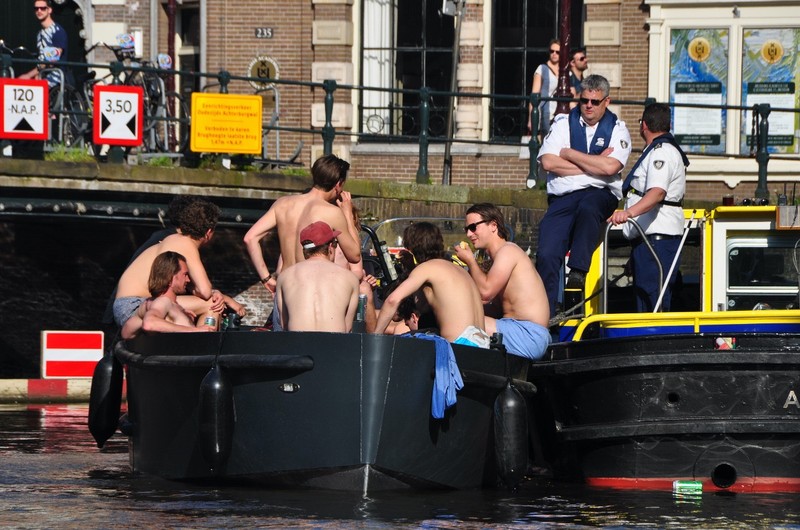 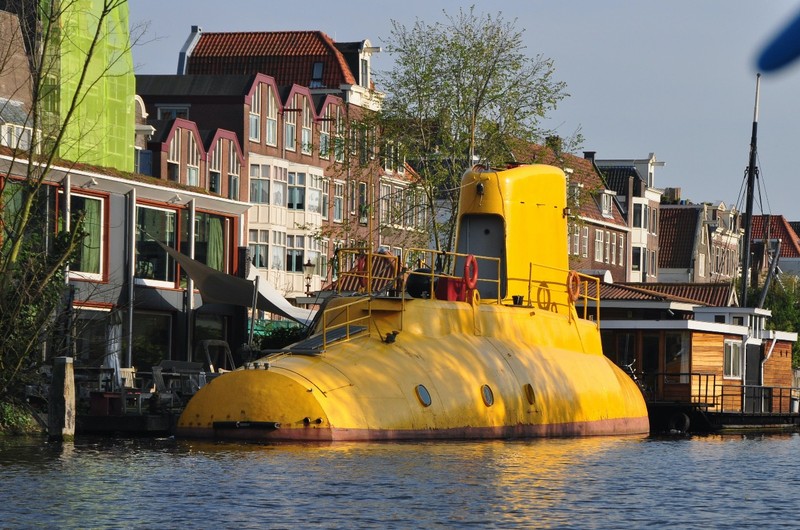 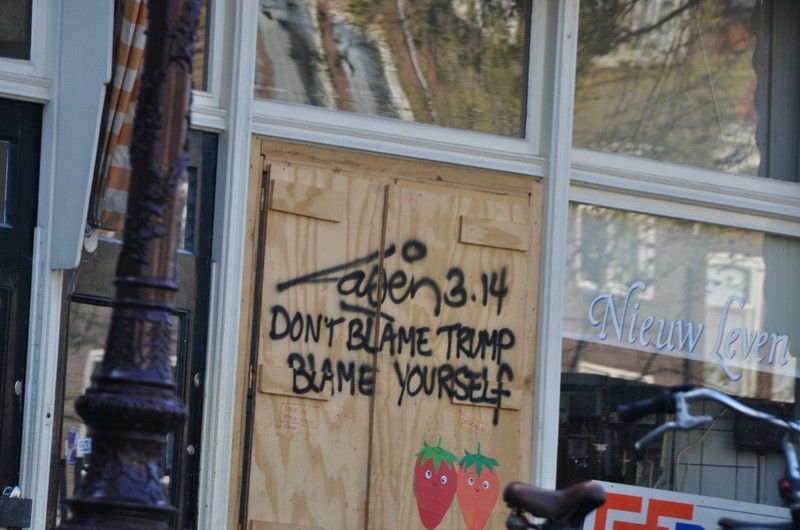 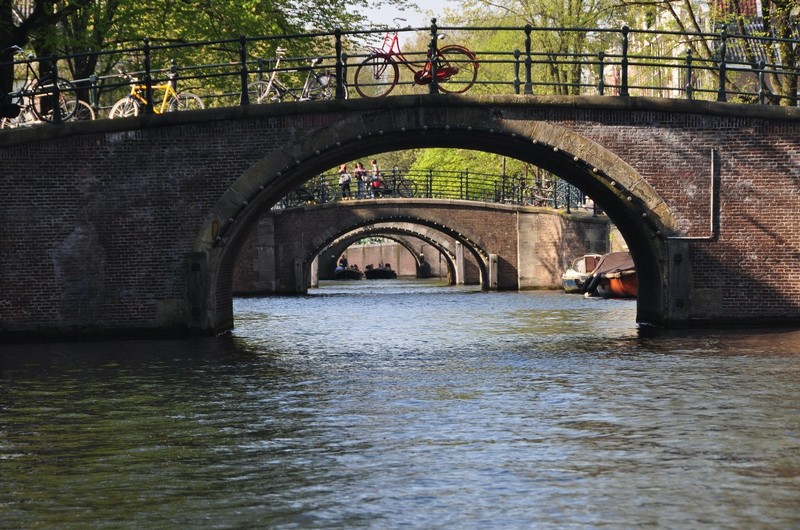 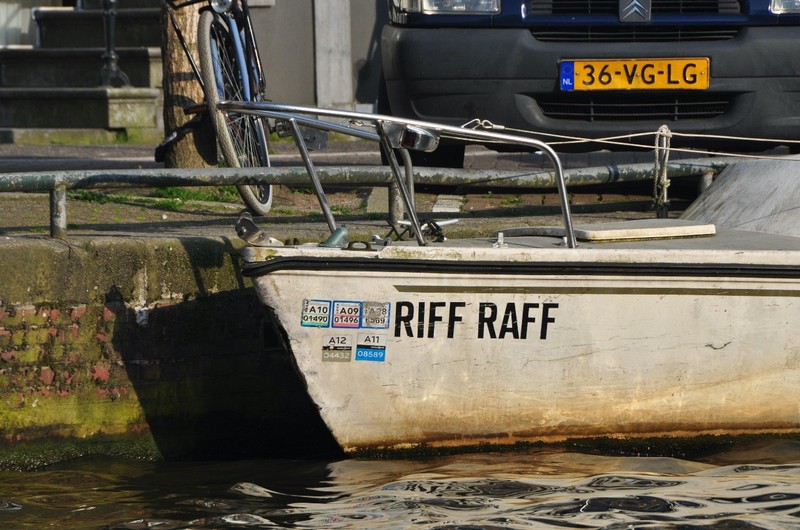 We board a canal boat, pop open cans of Heineken Beer and a nice bottle of Prosecco to accompany the hors-doeuvres brought on board by Lita. Our boat captain points out the sights as we wind our way through the canals that distinguish Amsterdam in concentric arms reminiscent of the wings of Washington’s Pentagon.

The weather is perfect and the conversation is better. It is the first time in Amsterdam for B4 and I have been here only once but that was, what, twenty-five years ago? Of course, Amsterdam is the same. Unlike American cities which evolve and change, European cities remain as they were. One can leave the “Old City” centers of these places and visualize the same thing that was there centuries before.

Like taking the Grey Line tour upon first arrival in a new city, our boat ride serves a similar purpose by marking in our minds all the places that we would like to linger over during the next two days, returning by foot to linger instead of float too quickly by.

When, after 90 minutes or so, our float trip ended, we returned to quickly clean up for dinner for two at Rijks Restaurant which sits in the shadow of the Rijksmuseum Amsterdam. We dine, as it were, in Rembrandt’s back yard.

When we arrived in our room we were greeted by a hot house environment that hit us like a furnace when we opened the door. The air conditioning had ceased to function in our absence but the sun had not; one of our corner windows faced west as did the floor to ceiling glass in the bathroom. My deodorant stick melted in its plastic container while my hair gel liquefied. I called downstairs and was promptly accused of bringing this heat wave upon myself by, perhaps, leaving the window open. “The air conditioning will not function with a window open,” I was told. Neither B4 nor I had opened a window but, upon inspection, I found one that sported a broken latch and had blown open just enough to break the circuit which operated the air conditioning cutoff.

No hotel employee distinguished themselves during this fiasco except for the hotel engineer who tried valiantly to cool the place down. It took too long but, eventually, once we returned from dinner, the place became again inhabitable.

Dinner at Rijks was morels and tuna tartar preceded 4-week aged ribeye which was sold by the kilogram. Lovely.

We walked back to the Okura and to a mostly abated hotel heat wave. Having no meetings nor work to do the following day, we did not set an alarm.